Bear in mind that what you see in these photos is a dish after I'd already partly tucked into. I was hungry I only remebered after a while :-) 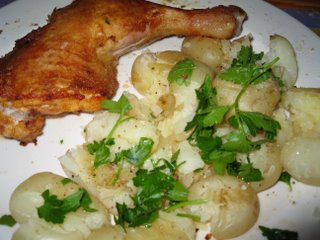 Organic chicken legs dipped in a mixture of flour, paprika, cumin and cayenne (S&P too). I would have put in other spices, dried chilli for example, but I was between TV shows so I was rushing (hence the ripped parsley for the potatoes :-)). I dusted it off and roasted it for 40 mins.

The ickle potatoes I simply boiled in salted water and smothered them (after crushing) in butter and parsley.
Posted by Nazca at 11:09 pm 6 comments:

I had lots of potatoes left over from the roast rib eye at the weekend. I like to kill as many birds with as few stones usually, so I decided to whack the remaining spuds into one big glorious dish. I also had some cream left unused from said steak bonanza; just in case I wanted a nice creamy sauce for my meat. 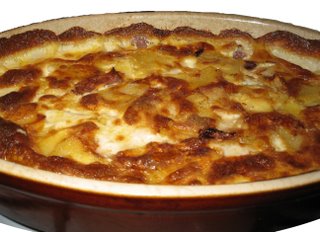 I decided on dolphin potatoes because it's rich, creamy and, as Nigella would say, soul food. My soul is perfect at the moment, but you never know when it might need a top up so I decided to practice... just in case. 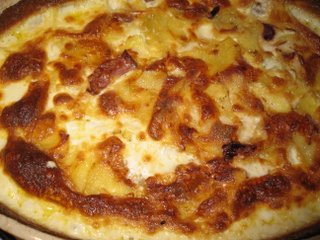 Plus I have a new toy, food processor, and this dish involved lots of thin chopping. Perfick. After saving hours on the chopping of potatoes I made it all back on the washing up. Hey ho. 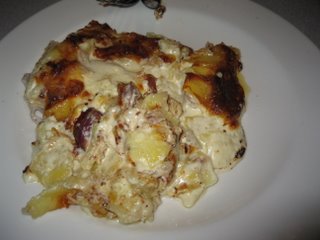 The red/purple bits you may be able to pick out are red onion slices. What you won't see is the garlic and large amount of black pepper (and salt). I'm not one for bland food.

I buttered the ceramic dish and pre-heated the oven to 180C. I packed in the potato slices, onion and garlic nice and tight.

In a saucepan I heated a mix of cream and milk until simmering point. There might have been more cream than milk... :-) This gets poured onto the potato mix slowly until it just reaches the upper layer. You want a few bits of potato sticking out to crisp up. (I think I had just enough to cover the mix too much, hence no (too) crunchy bits, but also no waste).

Then added some dolcelatte (birds/stones again) and butter blobs onto the top then slammed it in the oven. I was gonna leave it for about an hour... but checked it 10 mins before and it was done. Christmas come early!
Posted by Nazca at 10:45 pm 12 comments:

Got an eye for a good piece of meat 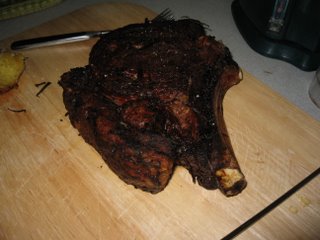 Had a long day yesterday, music festival, night on the dancefloor (and yes, Naz is cringeworthy while struting his stuff) and then I came home and sat through Utd's game against Ajax (I'd recorded while I was out). We won btw :-)

When I woke up this afternoon I took this beauty out of the fridge and let it warm up. It was about 3-4 inches thick I guess. To go with it I put a simple marinade together. I bashed some rosemary in a mortar and pestle (with salt) then added a little olive oil. I pan fried the Rib Eye joint quickly to get the cooking process going (it helps break the fat down [it doesn't "seal" the meat, that's a myth]). I covered the joint in dijon mustard, pepper and the rosemary mix and bunged it in the oven for a few hours. Served with roast taters and digest for a week! 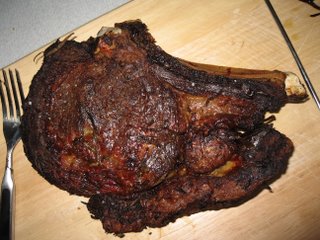