Nice quick batch of breads. Foccacia style, mini loaf, flat bread and oven bottom rolls. The last two were "baked" in a dry frying pan; I was feeling adventurous :-) All from the same initial dough, which was a basic white bread recipe with a few oats and stuff. And some gran padano cheese grated in. Probably why the crusts came out so brown. 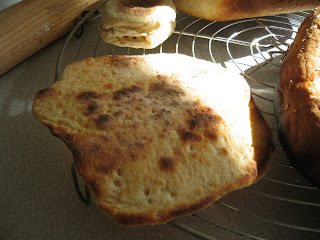 The flat bread and little roll above it were done in a dry frying pan. Took just a few minutes on a medium heat... 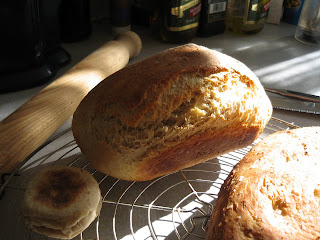 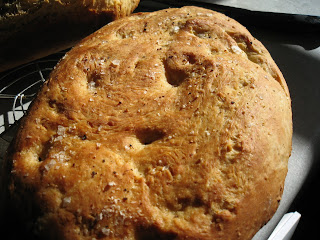 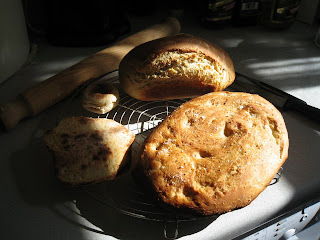 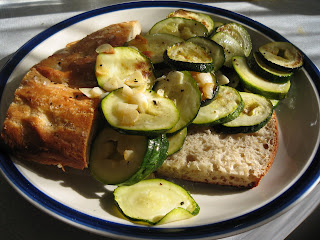 Few grilled courgettes with garlic, served with the foccacia style bread.
Posted by Nazca at 3:27 pm 8 comments: Links to this post

I've been putting a lot more focus on riding and running as of late. After going for a bit of a loosener yesterday (40km?), I went for a nice 50k ride along a canal today to a place called Dunham Massey Hall: All that riding left me a little peckish so I made this: Not bad for one of the hottest days this year... it's a few hours later and I'm still burning up!
Posted by Nazca at 11:35 pm 3 comments: Links to this post

Some of you have been enquiring about my absence - fear not I'm still here, just a lot thinner and able to run 10 kilometres... who'd have thunk it?!

I'll be back soon, though the Daring Bakers seem to have vacated their old premises and my key doesn't work any more... I think they escaped while they could!

Well it is isn't?! But don't worry all political comments on America have been surgically removed! Now I didn't have much time this month, I like to do by baking at the weekends and I had several things on. Therefore I only got one chance to pull this off, and no time to prepare. Rushed it the keyword.

As a Daring Baker I have every right to make every recipe as hard as it possibly could. So I don't own any nice tart dishes or loose bottom thingamabobs. Or measuring cups for that matter.

I assembled the dough. Guessing that a cup of solid butter was a certain weight. Why would you measure a solid in mls? baffling! Once it'd been made to work and chilled I put the dough into a square steep sided dish, stuffed in the (mainly guestimated amounts of) filling and topped it with meringue. I know what you're thinking "that'd never work for me, he must be a genius!".

But I'm a skilled eater and I'll eat anything (see the battered haggis, and battered Mars I had up in Scotland this weekend!). So when mine eventually was sliced (dug out) the runny lemon filling is no problem at all ;-)

You might be able to tell I'm not a big fan of this American mainstay; I think it lacks depth and just doesn't sit on the tongue nicely. Maybe it tastes better when done properly...

This month the amount of sugar (in tonnes) used was... oh. Savoury? Cooool!

Now I make bread all the time... *waits for applause to die down* ...please... ...no, you're too kind! Anyway, I was happy to have a go at this new challenge in flour and yeast meddling, though I wouldn't have much time. I knew I could only do it on the last weekend of the month, since I only try each DB recipe once anyway I wasn't too concerned ( I just can't afford the professional cleaners and laundry bills!) so I dived into the shops after work on a Friday to grab everything I needed for the Saturday. 30 minutes later I had everything I needed and was... cr*p, I forgot to get potatoes. I hoped the smaller store nearby would have roasting potatoes. They didn't, they had floury normal ones. Do I buy them and save hassle now or go back and get roasting potatoes and save the recipe...

Sticky moment I think you'll agree, hey? WELL THAT'S NOTHING! NOTHING! ...compared to what this recipe doles out! I've never seen "dough" that sticky in my life. Of course, I'd bitten off more than I could "chew" (chew in quotes to highlight how unchewable 16oz of mashed potato, several cups of cooking water and some flour is). The recipe says need for 10 minutes. Knead? How do you knead superglue? I'm going out and buying a dough scraper first thing Monday! The adrenaline was pumping; I think at this point all DBers smile if not on the outside then on the inside. Cooking is fun after all, and new recipes are even funner.

I wasn't counting the cups of flour I added to make it pliable, I just kept going til it wasn't a complete joke. Still, after 30 minutes I reckon I had a cross between wallpaper paste and a normal bread dough.

Ahh time to relax, it's in the bowl proving. Then Marce starts giving me helpful hints about what to use at flavourings to make it more palatable. I hadn't thought that far ahead. I was still in survival mode. She told me what she was using and said I could use that too. So I did. -n't. In fact I was told in no uncertain terms that she'd hunt me down and batter me with her rolling pin if I did. What ever happened to All For One DBer and One For All DBers, that's what I want to know?!

Anyway, after it had been allowed to prove a little it was far more manageable. Thanks be to goddess Nigella. So a quick need and some of it was off into the slightly too small loaf tin and the rest into a flat tray. As you might be able to tell the loaf kinda over-flowed a little. It was still quite sticky pre-baking. Still with a little pepperonata, a few cherry tomatoes and a couple of venison sausages all was well with the world. Sausage and mash, get it?! Honestly, I should get awards for this material. The bread goes well with Marmite too. In case you wondered :-) Last time I made focaccia I pre-fried all the toppings and lovingly applied the toppings to the lovely doughy top. But this time I was busy watching a DVD so I just whacked it all on there. Fresh rosemary (from the back gar... shop) and thinly sliced onions. And a dredging of olive oil and a little sea salt. Thanks to Tanna for choosing the bread. I generally find the stickier the dough the better the bread, and this was no exception. It's wonderfully fluffy and soft, there's no focaccia left, I just packed the last of it as lunch tomorrow. I'll make them watch me eat it all!

Don't forget to check out my, probably less sticky, buddies here.
Posted by Nazca at 12:02 am 27 comments: Links to this post

Mi hermanita es... *AHEM* Sorry about that, my lil' sis is a chip off the old block. Or is that a son/father thing? Anyway, my sister and her friends have started to bake together, which is strange since they are students so you'd think beans on toast would be the order of the day...

First up is a chocolate cake. ClowiWowi eats tons of the stuff. Mountains of it. She skips proper meals just so she can go back to licking the wrappers... I feel safe saying this because she lives a few aeroplane rides away. Looks warm and comforting don't it. No, they didn't offer me any. Meanies :-P

Sadly good genes doesn't always mean good taste. Look at the swirls on this plate. Disgusting. Just get it in your mouth! I bought ClowiWowi Shrek for her birthday, her favourite character is not the gingerbread man. So, I don't really know why I brought it up. Impressive effort no? I'm not sure why his/her arm is coming from it's head but... who wants a "normal" one anyway! ;-) We're gonna be meeting soon, she's gonna bake me something tasty every day. She just doesn't know it yet :-D
Posted by Nazca at 10:49 pm 2 comments: Links to this post

The batter is made with Fursty Ferret bitter and flour. Nothing else, well, bit of salt and pepper. Just enough to make the batter easy to use (I think the term "cover the back of the spoon" is often used).

I was using a small saucepan so I chopped up the cod fillet into similar sized pieces, and cooked the fillet in two batches. It was perfectly cooked with 4-5 mins, the steam pocket created by the batter around the fish steamed the fish wonderfully.

I had a bit left over so I sliced an onion and threw it in. I put the left-over batter in the fridge for tomorrow, I have another fillet to use up. Nice and healthy after footy :-)