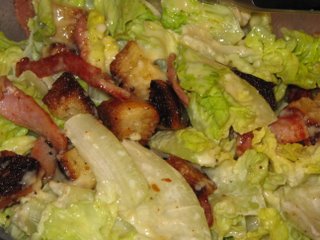 I had some anchovies left over from the weekend, so I was thinking what I could use them for. In a flash of pure (what would eventually be recognised as) self-hate I thought Caesar salad!

I got this recipe from Gino from UKTVFOOD. The salad was the best I've ever had, though it means I'll have to eat salad for days because I made so much dressing! It's day two and it's getting a liiiiittle boring ;-)

I whacked it into my food processor and a minute (or two) later I had this: 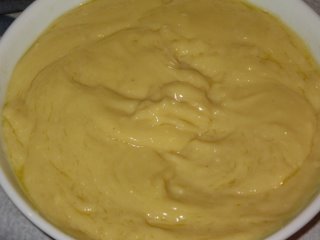 It came out like (home made) mayonnaise, consistency-wise, and like Caesar dressing taste wise. Ok, I am lying here, I've never chosen to have Caesar salad in a restaurant so how would I know what it tastes like? I may have to compare now though... and have a massive steak to balance all those nasty salad leaves.

Along with some crispy fried bacon and a few croutons it was pretty darn good (the first day...)
Posted by Nazca at 7:06 pm 5 comments:

Another recipe hemmed in by TV programmes or a football match (we lost... Spanish refs are [censored for ridiculous accusations]).

First the onions were diced finely and fried in quite a dry pan until the edge was taken off, and they browned a little. They were dumped onto my chopping board and spread out thinly to cool.

I placed chopped basil and coriander into a bowl, along with organic minced lamb. The onions were added along with finely chopped garlic. To that I added freshly ground cumin, cayenne pepper, ground turmeric and paprika.

That was all mixed thoroughly by squeezing it together by hand (you might want a bowl of hot, soapy water nearby for afterwards :-)) (I didn't, D'oh!)

I made four patties from about 400g of mince. Two were left to mature over night in the fridge, two were fried then and there.

The yellow stuff you can see is turmeric coloured juice/fat (before you ask I had my cholesterol checked today and it was below the average for a Brit :-)) (which is not saying much! :-( ) 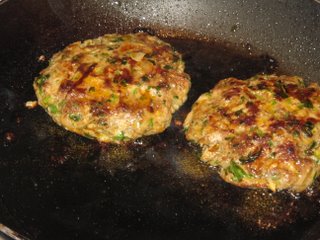 I served the koftas on basmati with fresh coriander stirred through and chucked on top (presentation counts for nothing! The only reason you're seeing this recipe is that a Cream Puff nagged me :-P)

...and a minty yoghurt concoction. Greek yoghurt mixed with a dash of white wine vinegar, vanilla infused caster sugar and dried mint (they were out of the fresh stuff, and I used the last of mine on the rack of lamb at the weekend :-)) 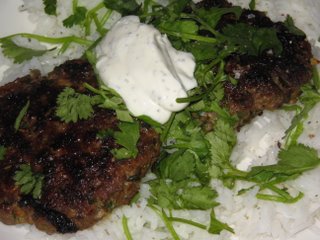 These are the babies I made yesterday and left to mature. They tasted pretty good for improvisation.
Posted by Nazca at 11:15 pm 9 comments:

Well that was our code to keep our "ickle" baby sister from hearing the 'must have' ice cream. Nowadays she's all grown up and has lost that craving for ice cream... HAHAHAHAHAHHAAAAHA 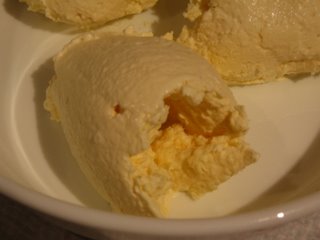 I used this recipe, from uktvfood again! Tamsin Day Lewis's recipe, who's a great cook of good, old fashioned, recipes. Even if I do find her hair disconcerting... anyway, that's enough about me!

This recipe calls for 4 egg yolks. Which means I have 4 egg whites to mess with. What better than Pavlova to go with my ice-cream. I used an average recipe again, but it still burnt! No idea what I'm doing wrong... though I suspect it's my gas oven... grrr

Still the top part could be salvaged! This is it sprinkled onto the I-C-E :-) 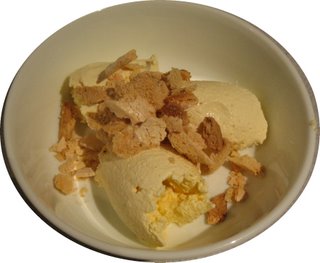 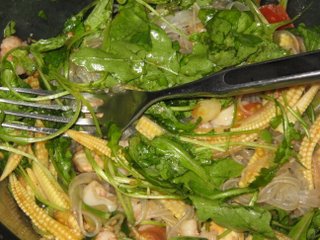 Again my choice of meal was governed by the time, I had 30 mins in between cookery shows :-D

I had a packet of assorted sea food, prawns, squid and muscles. They were fried in a little garlic oil and then drained (loads of water came out).

Rice noodles were boiled and drained.

The baby corn what quartered lengthways and fried in garlic and ginger. Then in went spring onions (scallions) and baby vine tomatoes.

To build the dish (:-)): Seafood, rice noodles, stir fried veg., rocket and fresh coriander. A little ground pepper and soy sauce and it was fit for a king.
Posted by Nazca at 10:42 pm 5 comments: 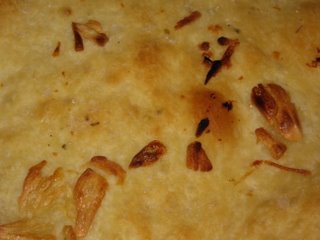 This is "my" basic pizza dough with a few additions. I've added Gran Padano and dried oregano. And when I say my recipe, I mean Giorgio Locatelli's recipe of course :-)

I've described the pizza process before here. The topping consists of a few cloves of garlic, roughly bashed with a mortar and pestle, and then covered with some nice Greek olive oil I just bought from the market. A little on top, then some sea salt. I rolled this one quite thick to give it that nice doughy feel; with the oven on max and pizza stone nice an hot inside it was time to cook :-) 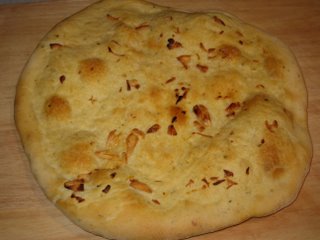 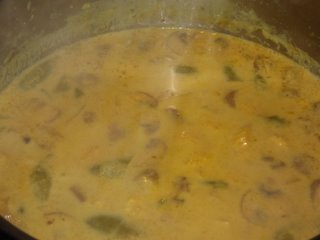 If you've read the below fudge recipe you'll know I needed something basic and easy to put on while I fiddled with the unknown new recipe. I'd cooked this recently but not bothered to blog it since it was soooo simple and I'd done something like it before.

However, following recent feedback I thought I'd try informing readers a little more. So I showed some intermediate stages in the fudge recipe and added a few little helping "oh, my god should this really happen?!" hints. I don't know if is should happen, at least you know it happened here!

Onions, sliced and fried in oil/butter until brown.
In with garlic and ginger grated, dried chilli chopped.
Next, baby corn on the cob, roughly chopped, and chucky chopped mushrooms next.
S&P.
After they'd fried a little, in went a blend of toasted cumin and coriander seeds, ground fenugreek, turmeric and cayenne pepper.
I waited til the spices had had a chance to cook off the raw feel to them, then I added coconut milk and chicken stock.
Then in with the sweet snap peas, I suppose they could have gone in much nearer the end (I left mine for 45-50 mins) but I had fudge to do! 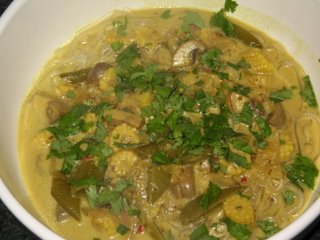 I added a tracker recently, at the time of writing I've had 120 visitors since last week. It's nice to know someone is actually reading this stuff, I hope it doesn't all go to my head... from all the cakes I've been baking lately it's more likely to my stomach (not hips, I am a man after all).

Anyway... Fudge. I was recently wandering through the Arndale Market and found a stall that sells nuts, nuts and chocolate covered things. Being a sucker for expensive things I bought some raw macadamia nuts (and some roasted and salted ones to eat while relaxing later on ;-)). I thought it would be nice to try a little kind of toffee thing, I've never done toffee or anything like it before. I trawled for recipes and decided on this one, because a) it was in British measures I could readily adapt and b) because it was the simplest I found. So after buying a thermometer yesterday I thought I'd give it a whirl tonight. I cooked a very simple Lacksa type thing so I could concentrate on this new recipe (see above).

Once I'd followed the recipe (wow, that was a LOT of sugar!) and it had finally reached soft ball (took ages!) I let it rest for a few minutes (in which time I ran for my camera)... 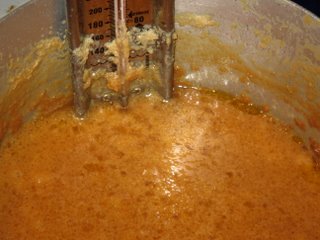 (looks yummy hey? ;-)) ...then stirred in the [saucepan] bashed, toasted nuts. Stirred until thickened and then poured it into a makeshift container: pyrex dish coated with a silicon baking sheet.
And viola: (this is when it's still pretty hot and molten. It solidifies pretty quick... if you leave a bit of a plate to test :-) 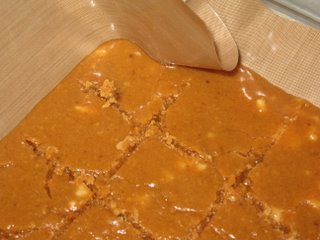