Friends at work have been demanding blueberry muffins from me. They're not happy with chocolate fudge cake and chocolate cheesecake, ooooh no! It was even free! And yet they demand more. A lesser person would have given in, but I'm a bastion of pride (and hence numerous embarrassing falls) and elegance. 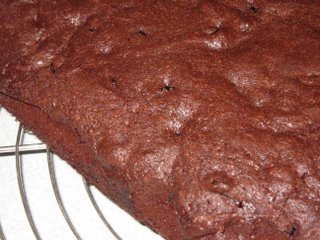 I used (dried) sour cherries in my cheesecake lately, and on inspection of the same isle of the local supermarket I found similar dried fruits, yes, you guessed it, blueberries. Now, Marks and Spencers like to import their "fresh" blueberries from somewhere suitably far away (and hence pumping: ozone eating chemicals into the air (hence the greenhouse effect accelerating); and at the same time particulates which block the suns rays from the earth (hence, paradoxically, negating the said heating effect)) I thought it would be better to get the dried ones... that, er, i didn't check where they came from... er, so yeah, ignore my previous rant...

Hugh Fearnley-Whittingstall's book The River Cottage Year, or some such, has a recipe for brownies and cherry sauce. While I used the recipe for the brownies, I decided to chop up the blueberries and chuck them straight into the mix.

You can see the results here... if you look very closely you can hear me salivating :-D 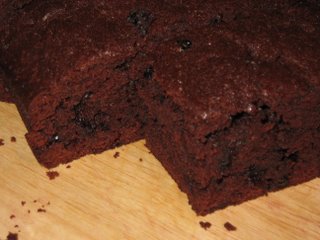 I used this recipe on this occasion, again from UKTVFood. I hope they don't charge :-S 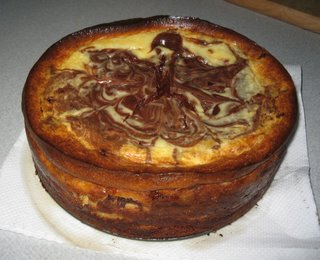 I made some adjustments to the recipe as it was set out, most were on purpose (D'Oh!), I didn't put the sugar in the choc, but put it all in the general mix. What difference that make nobody will ever know... or more importantly, care. :-)

The other thing I added, this time on purpose!, was chopped dried cherries. Why not? The texture of my other cakes was lovely and smoothe, this will be as smooth apart from the chewy bits :-) I could have soaked them in a liquer or something, but I don't have any cheap stuff and I'm not going to put in £40 whisky/brandy in there, I'd prefer to drink it thanks!

This next pic shows the huge chasm I put into it... *ahem* 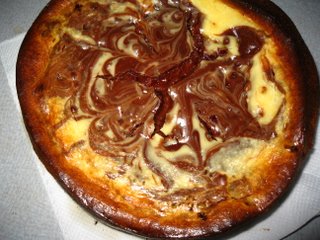 Ivonne made her pound cake and it inspired me. I've adapted that recipe and merged it with this one from UKTVFood. Mine's not as well finished as Cream P's but when is it ever? :-) 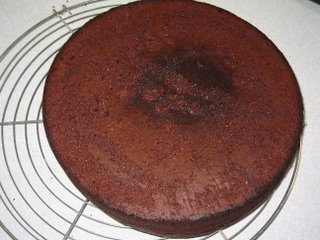 I don't have a round thingie, so I just used a normal cake time, and instead of making two thinner ones I made one large one. This was due to the fact that I'm lazy, there's less washing up and I only have one this size :-) That pic is of the botton, I flipped it so it is easier to spread the choccy onto. 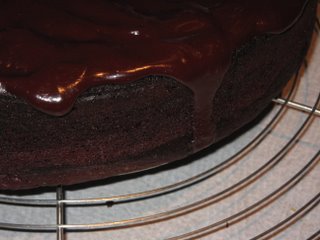 My topping was a bit like Ivonne's, it's just cream and chocolate... oh, and a bit too much Couvoisier Brandy. Oh well, what's wrong with a little kick in your cake?

The result was a lovely moist choc cake, with a "subtle" brandy twist... I enjoyed mine with lots of cream :-) 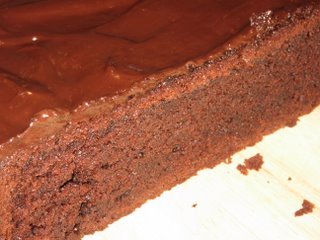 I got a little tipsy on Friday after work, which isn't a bad thing, until you wake up with the vague image of you at a supermarket checkout...

Luckily I did buy some real food and not just chips and dip! But since I wasn't planning on buying ribs I didn't really have a recipe on my mind. As fate would have it Catesa logged on as I was recipe hunting and she was nice enough to confide in me her family recipe. Not the secret sauce of course but at least I had a model to follow. 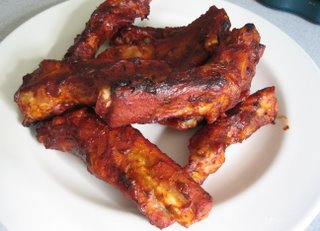 I par-boiled the sweet little things in salted water for about 10 minutes, then removed them and let them cool a little. In the meantime, I mixed some organic ketchup with Worcestershire sauce, oregano, some of the boiling liquid, paprika, cayenne pepper and salt and pepper. 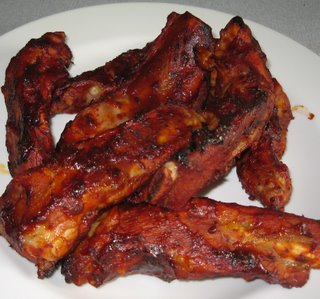 I left the ribs in the "barbecue" sauce overnight, then roasted them in the oven for 30 minutes.