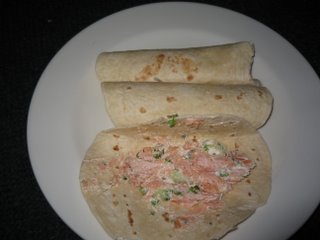 Looking quite yummy no? They tasty very yummy.

I bought honey smoked salmon chuncks (not a can in sight!) to go into this little dish (inspired by the one and only Catesa [she eats her weight in salmon every day, true fact!]). I had some creme fraiche left over from my previously blogged dishes, so I mixed a couple of spoon fulls with diced cucumber, thyme, parsley and the salmon chunks.


The I pressed my torti... ok, you got me... I opened a packet of mini tortillas and wrapped them up.

Again I've nicked this from Nigel Slater, though I've adapted it somewhat to fit what I had in the "magic" fridge.

I used Toulouse sausages, which have a high herb content, but use what you have to hand (that's Nazca's motto I think :-)).

First I sweated/fried off an onion, and a sliced stick of celery in a saucepan. When nice and see-through I added the de-skinned sausage lumps and browned them off. The sausage should stick to the pan (mine doesn't have a non-stick surface) which creates lovely crusty/caramelised bits of sausage. At this point I threw in garlic, dried chili, 1/2 red pepper and sliced chestnut mushrooms. Once they'd had a chance to warm through I chucked in the white wine (before the bits stuck to the pan burnt, but after the mushrooms had visibly started to cook), I used enough to just cover the contents of the pan.

Once the wine had reduced to about half (but more importantly, the rice had cooked) I put a spoon full of creme fraiche into the mix and stirred it in... 30 secs later it was ready to serve. 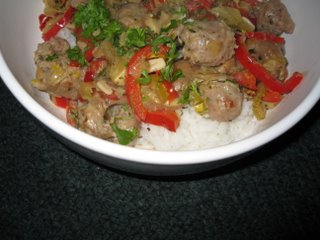 I wasn't going to have Chilli this weekend, until I saw a certain blog. I haven't had chilli for ages I thought.

So a tub of creme fraiche, and some steak mince later... viola as they say in Peckham (Only Fools and Horses joke there). 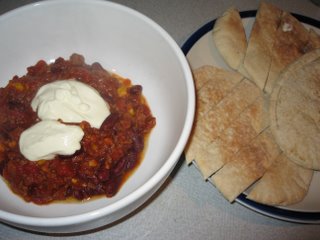 For this recipe you need lots of spring onions and basil that is getting older than the use by date. My usual scatter-gun approach to shopping went awry again, but from mistakes usually come strokes of genius... but er, I think time will have to tell on this one I think. 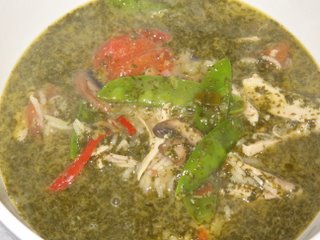 To use up my basil I made a quick pesto with the basil, spring onions and garlic. I drizzled in the olive oil while it was being blended. I put that in the fridge over night as I cooked the stir fry that night... hence the monge tout and baby corn you can see above :-)

I browned two big chicken legs in a sauce pan, and added chicken stock once the pieces had had a chance to work off the fat from the skin. After about 30-45 minutes (I was watching football and reading a book so lost track of the time), I removed the chicken and turned up the heat. In went a bottle of Riesling (minus a glass ;-)) and I left it to reduce to about 2/3.

I separated the chicken pieces whilst the "pesto" was added along with the left over monge tout and baby corn. I also had some left-over rice* and decided to add that with the chicken seconds before serving.

It turned out quite nice, though it was missing that je nais se quois to properly cap it off I think. There again, maybe it was just too much fusion cooking, it is after all two left-over meals and chicken pieces. A dish too far maybe.

There was certainly nothing at the bottom of my bowl though :-)

*from the day before stir fry (salmon steak with vegetable rice [fired onions, peppers, garlic etc and then rice and water, you get the idea])
Posted by Nazca at 11:26 pm 5 comments: 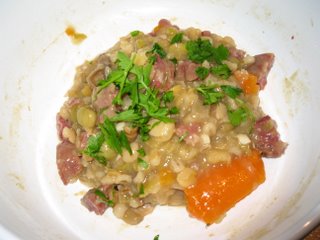 What do you mean you can't see the duck?! Oh yeah, it was a duck cured sausage that I used. Did I not mention that?

Recipe:
I diced a red onion and fried in a little bit of butter... ok, a good wedge. Once they'd started to caramelise I added large chunks of the duck sausage and a couple of cloves of roughly sliced garlic. Once they'd had a few minutes to start the fat melting I added a large carrot (quartered length-ways) and about a litre of chicken bouillon.

I had soaked a mix of dried lentils, peas and other assorted "healthy" bits in water over-night, they went in next; along with some dried porcini mushrooms. To be honest I think the mushrooms didn't taste of much in the end, I think they must have surrendered their flavour to the wonderful background taste though.

After exactly 45 minutes (i.e. the first have of West Ham V Aston Villa) I removed the large chunks of sausage and chopped them up a little and mixed them back in.

The first serving was much broth-ier than the encore I took the picture of above.

I was watching Nigel Slater the other day and he came up with this really simple recipe involving goats cheese, pesto and puff pastry. 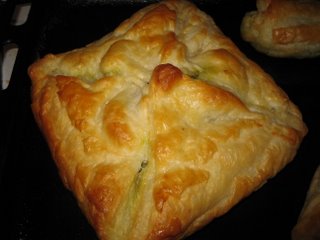 We had a French market in Manchester this weekend, I went down on friday and picked up some gorgeous blue brie and a nice lump of goats cheese. The blue brie was harvested for dinner on friday night (I even bought some fancy crackers: rosmary, wheat and, cheese and walnut). There's not much of that left now :-)

For the pocket you place the goats cheese in the centre of a square of puff pastry, dollop on a spoon of pesto (Giovenese in my case [bought at an extortionate price from Marks and Spencers; it was only quite average too!]). Egg wash the outer sides and fold towards the middle, then egg wash the outer side. 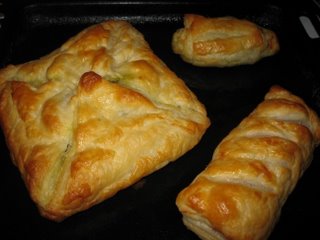 As you can see I had some pastry left over (it was store bought). Luckily I had picked up some fine pork sausages at the farmers' market and I had one left over from breakfast (which was accompanied by black pudding and fried eggs :-))

So a quick sausage roll was produced. Still more pastry left over: so the smaller of the parcels is just pesto and parmegianno regianno rolled into a sausage. 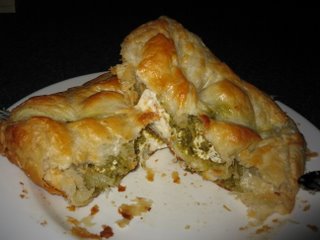 Er, yeah... oranges and just more oranges. Six to be exact, I hand... used my processor to squeeze them. The green bits are little slices of fresh mint, the deeper orange bits are orange peel.

It's definitely the healthiest thing that pint glass has ever seen, I can guarantee that!!! 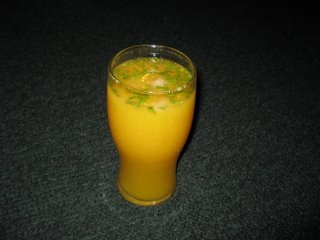 BBQ and other stuff

I've been off on holiday really and not really taking care to blog. 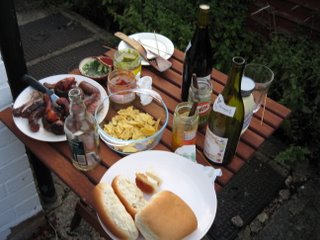 I was traveling through France with my parents, a very businesslike road trip. Above is the BBQ I had at my bro's place on the way to France. I bought loads of sausages at the farmers' market and took them down; Toulouse sausage, pheasant and venison, Angus beef sausages, and some rare breed pork sausages. We bought a disposable BBQ and along with a few bottles of red had a great time. They even convinced me to whip up some burgers, they didn't have to lobby too hard! 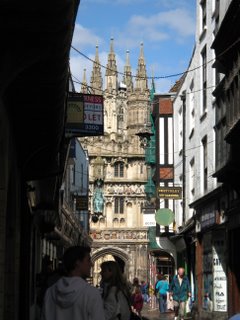 We were staying in Canterbury after that, before going through the Channel Tunnel to France. Above is Canterbury cathedral as seen through one of it's streets and behind the main(?) gate. We had a terrific roast buffet near there, turkey, ham, beef... and all you can eat veg. :-)

Then it was onto France, we stopped the first night in Chartres. Nice little town - I've done this all before, France I mean, but about 20 years ago! I don't remember much. That night I had fish soup, wonderful. And tasted my dad's onion soup (we're in France so I won't call it French onion soup :-)). I had the roast duck with pomme frites. These guys know how to make frites. I'm not sure what I prefer more, the great British chip, or the French Fry (not the American version obviously). Oh, it has a cathedral too: 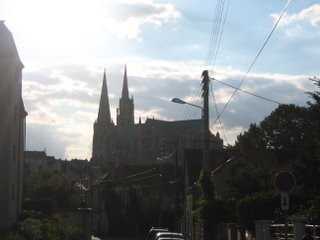 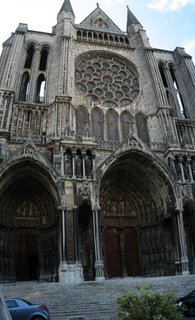 That second pic is stitched, that's why it looks a little funny aspect wise :-)

Lunch was my favourite time, we'd pull into a supermarket and pick up some salami or other meats, and a few tomatoes n' olives. Maybe a little cheese too. On the motorway we'd pull into a picnic site and break the baguette up and just lunch away. Simplicity is best :-)

We came into Toulouse then, we stayed on the outskirts and ate in the hotel for ease. I had what looked like (and tasted) like a blood sausage. It was OK, but coming from Lancashire it wasn't a patch on what I could get back home. Still the salad buffet was nice, mmm prawns.

Then it was on to Madrid, a nice little trip through and over the Pyrenees. 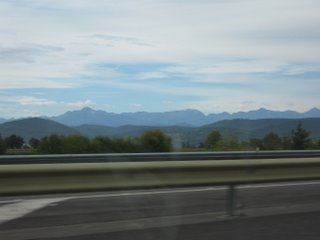 Once in Madrid we went out looking for somewhere to eat, luckily there was a nice Gallegan restaurant next to the hotel. We had a starter of pate (of some sort), Chanterelles in garlic, stuffed peppers and tomato bread/toast. Very very nice. And we finished of with steaks. It was a long hard journey just sitting in the back of the car being driven around. ;-)

Needless to say I felt a little heavy after the week of debauchery (I haven't mentioned the brandy, wine and whisky!), so I was a little uncertain when I saw the small passenger jet that was to take me home, luckily I made it back to tell my story.
Posted by Nazca at 11:03 am 5 comments: