Scraps from here are there

Ok, didn't do much shopping lately. And after the Chinese buffet at the weekend I didn't feel like food this morning (a first). All I had were some red onions. Luckily, my brother was getting rid of his leftovers, bacon and mushroom, since he's leaving for South America tomorrow (I see the world in how it affects my dinner). In exchange I cooked gluten free and shared it.

I fried the bacon in olive oil, then added the sliced onions. Then in went chunky cut mushrooms and chunky cut anchovy stuffed green olives (I always have a few tins in reserve). Then came the two cloves of sliced garlic. Then some dried herbs, oregano, sage and basil, with paprika and white wine vinegar. Then I added the basmati rice (I was gonna cook pasta, penne, seperately... but changed the recipe last minute to accomodate the bro), stirred it into the ingredients already in the saucepan to coat the grains in the oils and flavours. Then I added passata and chicken buillon(sp?) and left to simmer with the lid on for 20 mins.

Ok, I haven't been posting much lately. I've been away in hotels trying to bankrupt them by eating all the food in their english buffet breakfasts :-D

Since my larder was empty, i was buying quick and easy stuff (but none of that rubbish in jars!).

I did go back to the farmers' market though, bought to whopping pork chops, with a nice thick rind. I whipped that off for a start, scored it nice and deep and rubbed salt into it. Then stuck it under a hot grill with the chop (which had beed seasoned) until done. With a little multi-seeded bread that was dinner.

The crackling was to die for


Then there was the Cantonese buffet tonight, needless to say, hours later the mountain of ribs and salt & pepper chicken is still making it's way through my alimentary canal... too much information? :-)
Posted by Nazca at 12:17 am 3 comments:

After gorging on gorganzola and fresh bread [:-D] last night, I wanted something nice and light. So I ignored myself and made a nice filling rice dish :-)

I coated the beef in flour, tumeric, paprika, fenugreek, salt, pepper and ground coriander and browned it in a little oil and butter. Then I extracted it from the saucepan, turned down the heat a little and added chopped red onions and diced baby potatoes. Once they had had a good turn in the juices I added chilli seeds, garlic and fresh ginger. I added some chucky cut field mushrooms and stirred them into the mix followed by a good handfull of rice. The rice was unwashed, and just stirred into the oils and juices already in the saucepan. In with a couple of cardamon pods and I was nearly there.

Then in went beef stock and water to cover, then I left it to simmer with the lid on.

40 mins later it was ready for devouring. Only now do I realise I forgot the cumin... D'oh.
Posted by Nazca at 9:13 pm 3 comments: 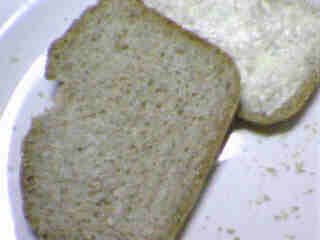 Happy now Catesa?! I baked this yesterday. It tastes great with some gold old Irisgh butter on top :-) 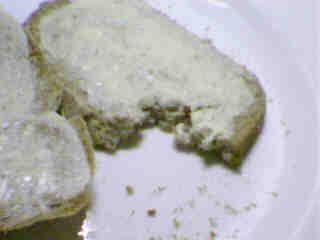 The Farmers' Market was in Manchester again this week. I bought two lovely thick, juicy sirlion steaks. I just like them simply seasoned with lots of pepper and a little salt.

I have a really good griddle pan, but this time i opted just to fry it in a mix of olive and vegetable oil. The hot oil sealed the meat and gave it a nice crispy crust. 4 minutes later it was done.

BLACK on the outside, but a nice PINK on the inside.

I had lots of veg. left over from yesterday, and a little steak. I fried off the steak first in a little butter, then added a few button mushrooms . Then some chopped veg., potatoes, carrot, cabbage, and onion. After a few minutes in the pot i added some oregano, salt and pepper. Then in went 1l of beef stock.

On went the lid and an hour later it was ready, a bit of fresh parsley and it was ready for eating! :-)
Posted by Nazca at 9:11 pm 3 comments:

I used potatoe, cabbage, carrot, onion, steak and magic to make mine. The pastry (shortcrust) was store bought, i just chopped up the veg nice and small and put it in the rolled pastry with a little seasoning and flour (for the gravy). A little eggwash on the top and then popped it in the oven for 20mins at a high temp, then reduced the temp and left for 40 mins.

With the leftover pastry I made a mini pasty filled with dark chocolate (70%), it only had 30mins (20 of those on high). It needed a little sugar on top really... I don't like it too sweet though, maybe next time.
Posted by Nazca at 11:34 pm 3 comments:

Carrots and onions went into a nice large saucepan to soften a little. Then in with the pancetta, and after it had time to cook a little in with the beef steak mince.

Then a little paprika, dried oregano and basil and to get the flavour off the bottom of the pan a little balsamic and white wine vinegar. Then tipped in a jar of passatta and let simmer for an hour... while I watched Man Utd getting beat again :'(
Posted by Nazca at 11:12 pm 2 comments: